Protests in solidarity with the Eric Garner case... 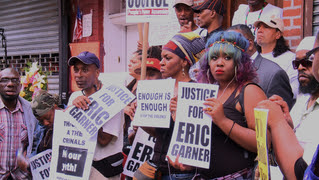 Eric Garner repeated his last words, “I CAN’T BREATHE” eleven times, as the New York City police officer’s illegal chokehold caused his death. I CAN’T BREATHE, has become a major protest cry against police brutality and the killing of unarmed innocent African American men. Authorities try to suppress the truth, with the only arrest in the death of Eric Garner being the person who video recorded the NYPD committing the crime of killing an innocent man.