[SITE MENU] [BLOG HOME]
Howard Zinn: The Prominent Influential Historian
Will Be Missed By Many


Howard Zinn (August 24, 1922 – January 27, 2010) American historian and professor emeritus at Boston University's Political Science Department . The author of many books, including A People's History of the United States, Howard Zinn was a civil libertarian, political activist, and an early opponent of US involvement in Vietnam. He was a powerful voice for the people and spoke out against corporate dominance, and urged the public within the US to resist corporate tyranny. He was also active in the civil rights movement and the anti-war movements in the United States. Howard Zinn died on January 27, 2010, of a heart attack at the age of 87 while traveling in Santa Monica, California. He is survived by his daughter Myla Kabat-Zinn.

"He's made an amazing contribution to American intellectual and moral culture. He's changed the conscience of America in a highly constructive way." -Noam Chomsky

Not only did he give us a better understanding of how history is written, disseminated, and recorded (and for whom), he gave us an otherwise lost history, that we so greatly needed to hear. He will not be forgotten. Arguably, the most important historian of American history, he has inspired many to seek the truth at all costs. Because, not knowing the truth, is ultimately, the greatest cost to society.

"He was a person of real courage and integrity, warmth and humor. He was just a remarkable person." -Noam Chomsky

He will be greatly missed.

The U.S.A. moves further to the right.

A landmark Supreme Court ruling allows corporations to spend unlimited amounts of money to elect and defeat candidates. This turns democracy on its head. In a system that's closer to one dollar, one vote, (rather than one person, one vote) big business can out vote the public on every issue. Obama spoke out against this, hopefully he will do something to turn this around.

In a five-to-four decision, the Court overturned century-old restrictions on corporations, unions and other interest groups from using their extensive revenues to advocate for a specific candidate. The conservative members of the Court ruled corporations have First Amendment rights and that we cannot impose restrictions on their political speech.

Justice Anthony Kennedy (writing the majority opinion) described previously existing campaign finance laws as a form of censorship that has had a “chilling effect” on political speech. Although, one lawmaker described the ruling as the worst Supreme Court decision since the Dred Scott case justifying slavery.

[SITE MENU] [BLOG HOME]
As we send aid to Haiti we must look closely at the way our country and organizations are doing so. We have to insist that aid is sent in the form of grants rather than loans. Haiti is a country that has been abused and controlled by debt, and we must make sure that relief efforts now will not later be used to further tyrannize and impoverish the people of Haiti.

Definitely keep giving and keep encouraging others to give, but insist that it's not used in the form of debt. Because, unfortunately, (as documented in Naomi Klein's The Shock Doctrine) the US has a history of using disasters to push through tyrannical policies, both here and abroad.
HAITI RELIEF NOW !
ϟ Earthquake Response ϟ
ALL PROCEEDS WILL GO TO HAITI DISASTER RELIEF.
Help Haiti by Buying a T-Shirt, Bag, Dress, or Jacket. 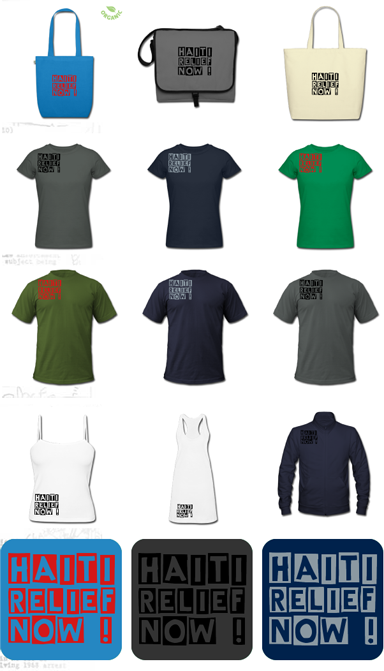 Help Haiti by Buying a T-Shirt, Bag, Dress, or Jacket.
ALL PROCEEDS WILL GO TO HAITI DISASTER RELIEF.
ϟ Earthquake Response ϟ
Donations through the Red Cross • redcross.org •
or Just text "HAITI" to 909-99 • or Call 1-800-RED-CROSS
• back to designs...
[BLOG HOME] [SITE MENU]
Posted by U:RESIST at 9:33 AM No comments:

"Why I Am Opposed to the War in Vietnam" -Dr. Martin Luther King Jr.

Martin Luther King, Jr. (January 15, 1929 – April 4, 1968) clergyman, activist, and prominent leader in the civil rights movement in the USA. King led the 1955 Montgomery Bus Boycott, spoke out against the Vietnam War, and his efforts led to the March on Washington (August 28, 1963), where he delivered his "I Have a Dream" speech. In 1964, he became the youngest person to receive the Nobel Peace Prize for his work to end racial segregation and racial discrimination through non-violent means, including civil disobedience. Dr. King raised public consciousness and established himself as one of the greatest orators in U.S. history. He was a chief spokesperson for nonviolent activism and protested racial discrimination in federal and state law. After he had refocused his efforts on ending poverty and opposing the Vietnam War, Dr. Martin Luther King, Jr. was assassinated April 4, 1968, in Memphis, Tennessee.

In 1977, he was posthumously awarded the Presidential Medal of Freedom, and a Congressional Gold Medal in 2004. Martin Luther King, Jr. Day was established as a U.S. national holiday in 1986.

The campaign for a federal holiday in King's honor began soon after his assassination, was signed into law in 1983, and was first observed in 1986, but was not officially observed by all 50 states until the year 2000.