[SITE MENU] [BLOG HOME]
Understanding the plight of others may be our only hope.
The denial of inequality as a core problem in society will only ensure it's ever growing existence. Even the privileged will ultimately benefit from a more enlightened society, hence, in giving up some privileges for wisdom.

Examining the dictionary definitions of some key words can help us better understand our own biases, rooted in the language itself. For instance, some dictionaries define underprivileged as being needy, and needy as lacking in ability, effort, and character. Also, in contrast, other parts of the definitions can be more constructive. I've tried to leave out most of the negative connotations, which I believe do more harm than good.

underprivileged |ˌəndərˈpriv(ə)lijd|
adjective
(of a person) not enjoying the same standard of living or rights as the majority of people in a society.

privileged |ˈpriv(ə)lijd| and overprivileged |ˌōvərˈpriv(ə)lijd|
adjective
having special or excessive rights, advantages, or immunities : in the nineteenth century, only a privileged few had the vote.
• [with infinitive ] having the rare opportunity to do something that brings particular pleasure : I felt I had been privileged to compete in such a race.
• (of information) legally protected from being made public : the intelligence reports are privileged.
privilege |ˈpriv(ə)lij| and overprivileged |ˌōvərˈpriv(ə)lij|
noun
a special and excessive right, advantage (or over-advantage), or immunity granted or available only to a particular person or group of people : education is a right, not a privilege | he has been accustomed all his life to wealth and privilege.
• something regarded as a rare opportunity and bringing particular pleasure : I have the privilege of awarding you this scholarship.
• (also absolute privilege) (in a parliamentary context) the right to say or write something without the risk of incurring punishment or legal action for defamation.
• the right of a lawyer or official to refuse to divulge confidential information.
• chiefly historical a grant to an individual, corporation, or place of special rights or immunities, esp. in the form of a franchise or monopoly.
verb [ trans. ] formal
grant a privilege or privileges to : English inheritance law privileged the eldest son.
• (usu. be privileged from) exempt (someone) from a liability or obligation to which others are subject.
ORIGIN Middle English : via Old French from Latin privilegium ‘bill or law affecting an individual,’ from privus ‘private’ + lex, leg- ‘law.’

Tim Wise - The Pathology of Privilege

Tim Wise - The Pathology of Privilege

equality |iˈkwälitē|
noun
the state of being equal, esp. in status, rights, and opportunities : an organization aiming to promote racial equality.
• Mathematics the condition of being equal in number or amount.
• Mathematics a symbolic expression of the fact that two quantities are equal; an equation.
ORIGIN late Middle English : via Old French from Latin aequalitas, from aequalis (see equal ).

It's always disconcerting when seemingly intelligent, well-meaning people, who you care about, don't understand the basic social, racial, and ever widening income inequality issues within their own country, and sometimes even within their own life experiences and field of employment.

A recent experience inspired me to post some basic information about the prison industrial complex that I thought everyone already knew. Even if you are aware, it doesn't hurt to review, rethink, re•fact check, and reexamine these important issues once again.

The number of sentenced prisoners under state or federal jurisdiction per 100,000 U.S. residents, by gender, race, Hispanic origin. 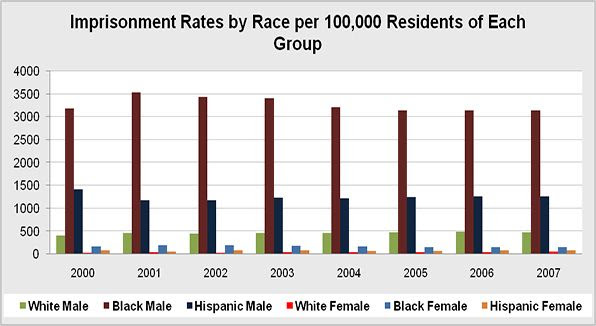 In May of 1973, New York's Governor Nelson Rockefeller pushed through the state legislature a set of stringent anti-drug laws. Among the most severe in the nation, the purpose of these laws was and is to deter citizens from using or selling drugs and to punish and isolate from society those who were not deterred. "It was thought that rehabilitative efforts had failed; that the epidemic of drug abuse could be quelled only by the threat of inflexible, and therefore certain, exceptionally severe punishment."1

The new drug laws, which have since become known as the "Rockefeller Drug Laws" established mandatory prison sentences for the unlawful possession and sale of controlled substances keyed to the weight of the drug involved. Generally, the statutes require judges to impose a sentence of 15-years to life for anyone convicted of selling two ounces, or possessing four ounces of "narcotic drug" (typically cocaine or heroin).

In 1977 The Committee on New York Drug Law Evaluations, a partnership between the Association of the Bar of the City of New York and The Drug Abuse Council, Inc., issued a report2 that was highly critical of the Rockefeller laws. The Committee found that heroin use and heroin-related crime (the major drug concerns at the time) was as widespread in the middle of 1976 as prior to the enactment of the Rockefeller laws in 1973. Despite the expenditure of $76 million and the appointment of 49 additional judges to handle cases under the new law, it was described as a dismal failure.

That same year legislators removed marijuana from the list of substances covered by the Rockefeller Drug Laws, decriminalizing its use and simple possession under 7/8 oz. They were concerned over the large amount of criminal justice resources and prison space being used for marijuana offenders. They felt that criminal prosecution and incarceration were inappropriate penalties for mere possession and use of marijuana. 3

By 1979, in response to extensive criticism, the legislature had amended the laws to increase the amount of drugs needed to trigger the 15-year to life sentence for both sale and possession. In 1988, concern over "crack" cocaine led to a lowering of the weight threshold for cocaine possession to enable the arrest and prosecution of people possessing small amounts of the drug. The Rockefeller Drug Laws have remained essentially unchanged since then. 4

Industries that profit from the imprisonment of our citizens

The list is almost endless but includes the following:

2. Food services that unload hundreds of tons of inferior food products on our prison population.

3. Clothing manufacturers who manufacture not only guard uniforms but prison uniforms as well, plus the ridiculous clothing that's given to convicts upon release.

4. Other profiteers include gun manufacturers, those who make the chemicals used to kill our citizens, casket makers for the dead ones, the medical profession tasked with keeping the condemned alive until they can be put to death, and even the P.R. operatives who lie to the press about the system and its abuses.

This is just the tip of the iceberg that is the system that preys on our citizens rather than attempts to educate and rehabilitate them.

Nearly every family in America has been affected in some negative way by the PRISON INDUSTRIAL COMPLEX. 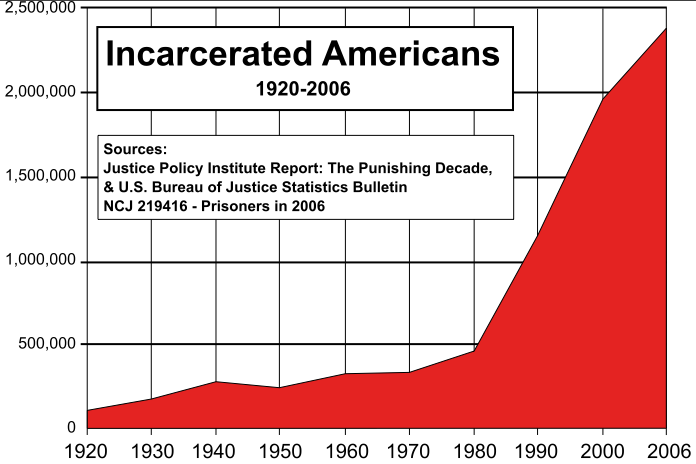